Air Marshal R Nambiar, Air Officer Commanding-in-Chief of Western Air Command was the Chief Guest of the event. He was handed over the keys of the aircraft by Dr. Tessy Thomas DS & DG Aeronautical Systems (Aero) of Defence Research and Development Organisation (DRDO). 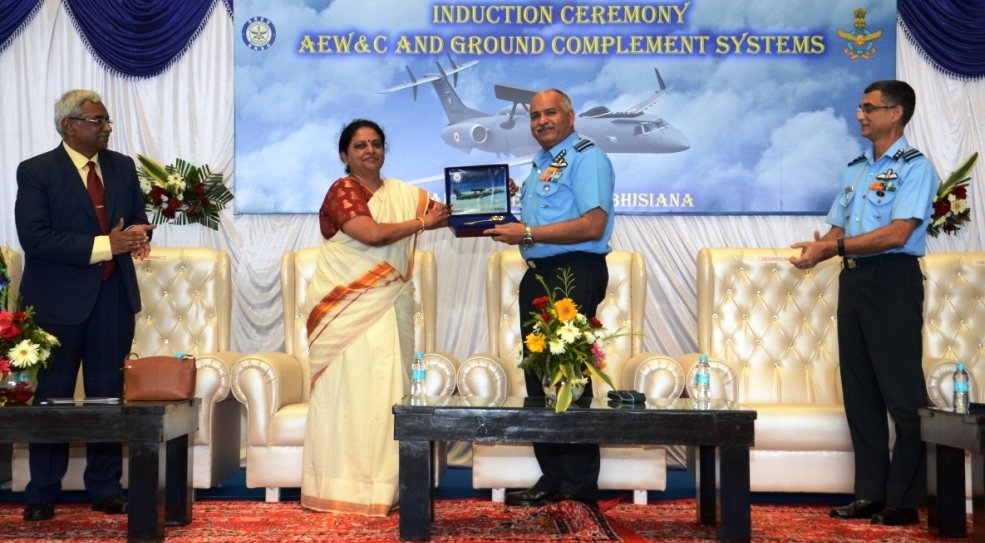 The Netra AEW&C system is an airborne surveillance system indigenously developed by DRDO to specifically suit the operational requirements of the IAF.

Primary responsibility for the project was with DRDO’s Bengaluru-based Centre for Airborne Systems (CABS), which led the design, system integration and testing of the system. DRDO’s Electronics and Radar Development Establishment (LRDE) was responsible for the design of the radar array while Defence Electronics Application Laboratory (DEAL) was responsible for the Data Link and Communication Systems.

The system is mounted on an Embraer ERJ145 aircraft (variant designated EMB 145I) developed by Brazilian aerospace conglomerate Embraer. Three ERJ 145 were procured from Embraer at a cost of USD300 million, including the contracted modifications to the airframe.

The AEW&C aircraft is a proverbial “Eye in the Sky” and derives its combat capability from a state-of-the-art integrated system comprising of multiple sensors, giving it an ability to pick up low-level targets deep inside the enemy’s airspace. The aircraft is also capable of air-to-air refueling which significantly enhances its on-station operational endurance.

The first Netra AEW&C aircraft was inducted into the IAF on Feb. 14, 2017 during the Aero India exhibition held in Bangalore. The aircraft has since provided air defence surveillance and control from the mountainous terrains of Jammu and Kashmir (J&K), through the deserts of Rajasthan and stretching to the Rann of Kutch. It also took part in all major exercises conducted by IAF over the last two years. The AEW&C aircraft also participated in Ex-Cope India 2018, where it controlled both Indian and U.S. fighters.

Netra also holds the distinction of undertaking the first-ever air-to-air refueling by any transport aircraft in the IAF inventory.